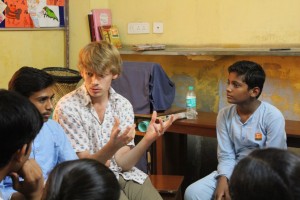 I could not have asked for a warmer welcome, from Veenaji and Gajubana, the teachers and the students. Everybody seemed hugely excited to welcome us to the foundation and to help and assist us in anyway possible. This warmth helped enthuse me from the get go and kindled a desire to do what I could to help give the children a brighter future.

One thing that immediately struck me was the level of English at the foundation. Of the teachers, only Ruksar (is the spelling correct?) and Gita seemed confident in using English and were able to express themselves and neither seemed hugely confident in doing so. The students English seemed non existent in the younger classes. The oldest children seemed to have a fairly well sized vocabulary and knowledge of certain grammatical structures, but to hold a sustained conversation in anything approaching correct English was impossible.

It took me a while to find my feet teaching, and to work out exactly what I could bring to the foundation. At first I tried to teach lessons using music as a starting point and then exploring other areas such as geography, history various cultures and the students own emotional responses to music. I found this was not particularly effective or efficient due to the lack of language skills. The students would nod along politely however when prompted to speak on any of the topics covered we would run into difficulties. When I had constructed the drums I began to teach the students on these. This brought a mix bag of results. Some students could pick up rhythmic and hand patterns very quickly, others however, were quite clearly what some of my musician friends would call, “muggles”.

I had some very satisfying moments teaching in this way. In one class I was explaining how real concentrated listening is the most important skill. I had the students (I think there were perhaps six or seven in the class) close their eyes and clap the clave rhythm. After a while, the students all synched up and found themselves in the same “groove”. Seeing the students in this relaxed state of intense concentration was a joy.

Another particularly lasting memory came with the arrival of Ferruccio. On a Saturday we took a number of students onto the roof to try and teach some music. After many attempts to do something constructive we found ourselves in an arrangement with ferro playing the ukelele and Avesh and myself drumming. Once we got going I really felt Avesh got ‘there’. The way he shared in the music, both led and followed, the classic ‘drum’ look upon his face, the way rhythmic variations came naturally to him, the intense wordless communion we had suggests he really got ‘it’. Here, like in yoga or meditation thoughts stop and you are only aware of the immense energy both given and received by the music and the almost telepathic connection you have with the other musicians you are playing with. This peak experience is one of the things I search for in music and can be quite hard to come by, If we did manage to share this with Avesh, who’s temperament lends itself so well to being a drummer, then I would be truly fulfilled.

Whilst I had a number of gratifying experiences teaching and sharing music, I do question how useful this was to the students. I am in an incredibly fortunate position where I can continue to study and explore music well into my twenties, I feel that the “real world” catches up with the children of Amer much sooner.

These thoughts led me to gravitate towards and end up making a home for myself teaching English with Priya. Here, I tried my best to utilize the teaching methodology I learnt during my tefl course. The basis of this is to have the students speaking and using the language as much as possible, whilst the time you spend talking as a teacher is kept to a minimum. I feel this is especially important with the children in Amer as it seems that there reading and writing skills are developed to a much greater level then there speaking and listening skills.

My lessons would normally follow the following formula. I would begin each lesson by saying hello to each student and asking how they are. Following this I would briefly recap some of the language used in previous lessons. If this was a success, I would proceed to introduce the new language for that days lesson. Often I would write the vocable or phrases to be used before demonstrating the use of the language with Priya. I found mime, gesture and action to be particularly useful tools. I love to clown, and found this was a useful way to keep the energy levels high and help keep the students enthused and interested. After demonstrating the language, hopefully the students would understand, I would have them practice, first with me, and then with each other one at a time with Priya and I listening and helping if needed. If this all went well, often I would have the students stand up, move the tables back and then move around the classroom speaking with one another. When this worked it made me glow to see the students holding miniature conversations in English.

Often I would split the classroom in two and have them play a game using the language taught. One particularly successful game was having the students compete to turn a sentence from present to past tense or vice versa. In games like this I found it important to “cheat” as a teacher and pretend that the more shy students had raised there hands first. (If at all)

I found myself sometimes becoming exasperated when teaching that some students were not understanding a new or sometimes old concept. When I was studying at the RAM I read a wonderful book on music teaching called “the virtuoso teacher”. Here, it was stressed that there is no such thing as a bad student, only bad teachers who haven’t yet worked out how to get through to those students. I would try to remember this, take a step back, regather my energies and dive into a different approach. Teaching in this way is exhausting, however incredibly rewarding as you have to be constantly analyzing the classroom situation, and be ready to throw the lesson plan out the window and create something else in a moments notice. I must admit, some lessons I didn’t turn up with the required patience and creativity and ultimately failed my students.

I feel in general, the teaching method employed by the teachers still focuses much to much on reading and writing exercises. I have heard snatches of conversations in English coming from Ruksar’s class, however the other teachers seem to be still bound to reading and writing. They can’t be blamed for this as I assume this is the way they were taught English at school, so they continue in this fashion. An interesting side story, I was talking with a nice young man of a similar age to myself earlier today in Delhi. He worked as an accountant for an international company and had an excellent grasp of the English language. On first listening, I really hadn’t the foggiest what he was saying, he was using English words and grammar however he still sounded to be speaking Hindi. This stresses to me the importance of the students and teachers being exposed to native speakers, rather then receiving a bizarre version of Hinglish.

If the speaking exercises went to plan, and I still had time remaining, I would often have the students write some sentences in their books as a consolidation of the days learning. I also found the student were often more keen and able to use the language in new and creative ways when writing which would then carry over into the next days speaking activities.

Overall, I really, really enjoyed teaching and hopefully managed to help brighten the students present and their futures just a little. Spending time in India has really showed me the reality of just how privileged I am to have received the education and to still have the overwhelming range of options that I do moving forwards with my life. I am grateful beyond words for all I have learnt at the foundation both about myself and the wider world I am a part of. I have been humbled and often moved to tears by the love anf generosity that exists in the foundation. I really believe it is a truly special place, it has helped me rediscover many of the wonderful child-like qualities within myself.

Thanks upon thanks for all the work you have done.